What's Transponder Key & How Did It Come About?

Transponder keys have been around for decades but how did they come about?

Car theft using hot-wiring technic was becoming common back in the 80’s. To combat this trend General Motors introduced chip keys in 1985 by adding a security feature to their key.

This RFID micro-chip is an anti-theft device that sends signal to the immobilizer to start the car. Unless the immobilizer recognizes the digital serial number it won't disengage. So, even if a car thief managed to gain access to the car, they were unable to start it. To work, the programming needs to match the code in the cars' system.

When using the correct key, the chip inside the key disengages the immobilizer to allow the car to start.

Most people ask if they can program chip key by themselves -but we don't recommend it. It's better to reach out to a professional automotive locksmith to program it for you.

The difference between the two keys is that one has a micro-chip inside it and the other doesn't. The chip key needs programming before it can start working. But this is not the case with metal keys. 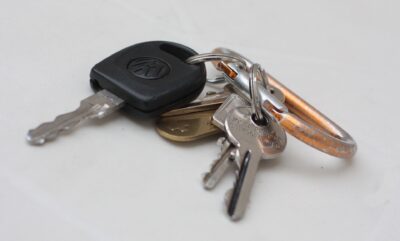 How to Tell if Your Key is Equipped with Chip

As part of an anti-theft security measure most car manufacturers adopted transponder key. Yet, there are older models that might still lack this feature. Figuring out if your car's equipped with one depends on the type of car you have.

One way to check if your car works with a chip key is by using an online resource like Transponderkey. It is a guide for identifying vehicles equipped with OEM immobilizers.

Another option is to contact your trusted locksmith service or dealership. Based on the year, make, and model of your vehicle a dealership or auto locksmith can tell if your car takes a chip key or not.

If you currently operate your vehicle with a metal key then it’s not transponder equipped.

How Much Does It Cost to Replace a Chip Key? Why Is It So Expensive?

The price to replace transponder key varies based on the year, make, and model of the vehicle. It also depends on the feature and benefit a key offer. While it’s true that chip keys cost more than metal keys, they also provide more functionality. So, it costs a little more for the added security it offers and the extra work it demands to program it.

Yet, it costs a lot less than the latest replacement car keys like key fobs, smart keys, and remote head keys (RHK). This is also due to the extra functionality a smart key offers that transponder doesn't.

Where to Get Transponder Key Made

Maybe you lost the only key to your car or its broken. Where do you go to get a chip key replacement service?

We suggest you go to a reputable professional locksmith company to save money. A dealership can also duplicate car keys with chips. But a mobile locksmith can do it much cheaper than dealerships. A mobile locksmith will save you the hassel and money of getting your car towed.

Go with a local locksmith for hassle free transponder key replacement service. However, not all locksmiths are equal. There are fraudulent locksmiths who lurk around to take advantage of unsuspecting customers. So, make sure you're dealing with a trustworthy car locksmith that has been around for a while.

If you lost your keys a locksmith technician can delete your old key codes from your car computer. This will prevent the old keys from operating your car.

Can Transponder Key be Reprogrammed?

Some transponder chip keys are reprogrammable but not all. If you're looking for a transponder key programmer, give us a call.

Can You Program Transponder Key Without Original?

Yes, programming most transponder keys without the original is possible. If you're in the market for car key replacement, Keyway Lock service, can cut you a replacement key. We are also a mobile auto locksmith so we come to you.

Can They Go Bad?

Though not common, there are times where a transponder key can go bad. Eg. If a car battery dies for a long time, then the key may lose its memory.

In summary, transponder keys offer better security than metal keys but it's not without its' limitation. Like with anything in life it's not completely foolproof.

If you are in the DC metro area, we will be happy to help you. Contact Keyway Lock Service today for any auto locksmith service, including broken key extraction service.

15 thoughts on "Transponder Key & Everything You Need to Know"

It’s not my first time to pay a visit this site, i am visiting this web
site dailly and take good facts from here all the time.

Glad we can be of help Galen 🙂

magnificent publish, very informative. I ponder why the opposite experts of this sector
do not notice this. You must proceed your writing. I’m confident, you’ve a great readers’ base
already!

Write more, thats all I have to say. Literally, it seems as though you relied on the video to make your point.
You clearly know what youre talking about, why waste your intelligence on just posting videos to your
weblog when you could be giving us something enlightening to read?

This is really interesting, You are a very professional blogger.
I have joined your rss feed and sit up for looking for more of your
excellent post. Also, I have shared your website in my social
networks

Thanks Della. Let us know what you would like to read more about, in terms of automotive or residential locksmith, and we will try to incorporate it on future posts.

Marvelous, what a website it is! This weblog presents
useful facts to us, keep it up.

excellent publish, very informative. I ponder why the opposite
specialists of this sector don’t realize this. You should continue your
writing. I am confident, you have a great readers’ base already!

Glad we can help. We’re always looking for ways to serve our customers better.

Hi there! This blog post could not be written much better!

Looking through this post reminds me of my previous roommate!
He continually kept talking about this. I’ll forward this information to him.
Fairly certain he’ll have a very good read.
Thank you for sharing!

Everything published made a lot of sense. But, think about this, suppose you added a little
information? I am not saying your content isn’t good., however suppose you added
something to possibly grab people’s attention? I
mean Transponder Key & Everything You Need to Know – Keyway Lock is a little vanilla.
You should glance at Yahoo’s home page and see how they create post titles to
get people to click. You might try adding a video or a picture or
two to grab people excited about everything’ve written. In my opinion, it would bring your posts a little livelier.

Hmm it appears like your website ate my first comment (it was super long) so I guess I’ll just sum it up what I wrote and say, I’m thoroughly enjoying your blog. I too am an aspiring blog blogger but I’m still new to everything. Do you have any helpful hints for inexperienced blog writers? I’d certainly appreciate it.